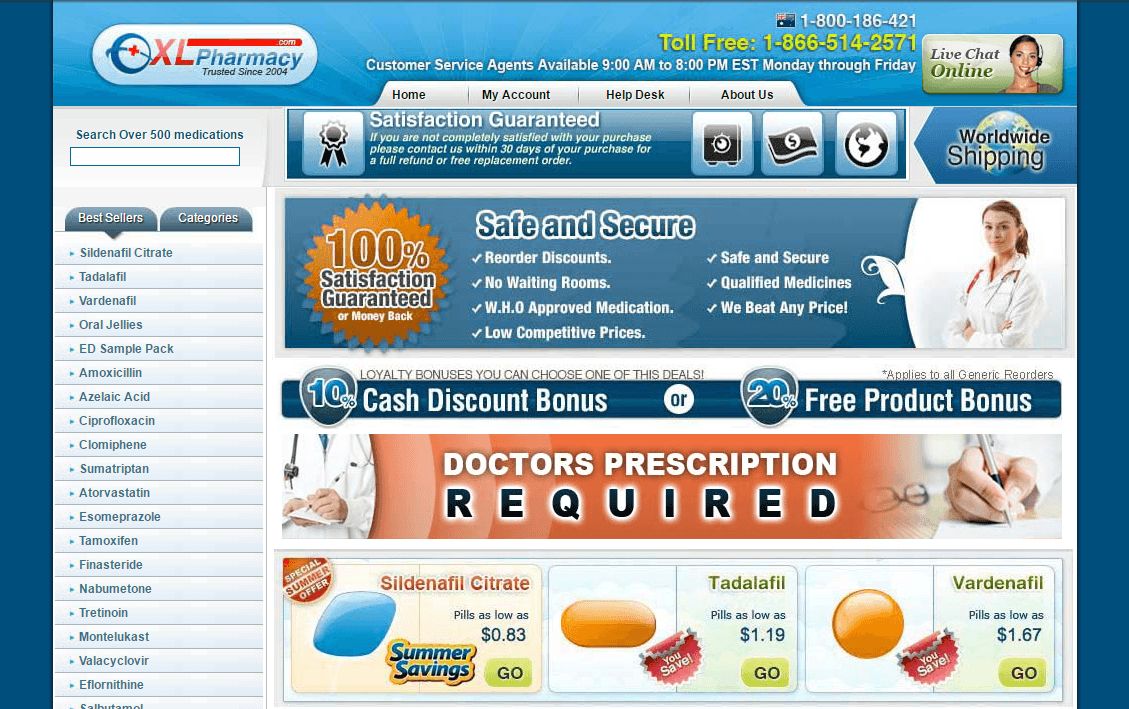 The store Xlpharmacy.com was a shop for buyers seeking cheaper meds with the same quality as the brand-name ones. The store marketed a 100% satisfaction guarantee for its service and offered to give the buyers’ money back when they weren’t satisfied with their purchases from Xlpharmacy.com. It was such a waste that Xlpharmacy.com closed down because the store operated for a long time—more than a decade even. Xlpharmacy.com started its business during the time when online pharmacies were not yet too popular; XL Pharmacy was inducted in 2004, but the store was last seen in 2015. During 2016 onwards, the domain of the store Xlpharmacy.com seemed to be already nonexistent.

Xlpharmacy.com sold products for a number of medical concerns. Most of the products were generic, and the store sold anything from Amoxicillin to generic Viagra and other erectile dysfunction medications. According to the shop, its products were all local FDA and WHO approved and were all safe to take. However, unlike other virtual pharmacies, Xlpharmacy.com required its buyers to submit prescriptions for their Rx medicine orders.

Based on the available information on Xlpharmacy.com, the office is located in Seychelles, but the products were shipped out from a number of licensed pharmacies located in “strategic” places around the world. There were no specific locations pointed out by Xlpharmacy.com, but the shop mentioned “Asia” and India as the sources of its medications. Xlpharmacy.com sold generic products for impotence and its Sildenafil Citrate was available for as low as $0.83 per pill, while its Tadalafil was also available for as low as $1.17 per pill. Shipping of the products ordered from XL Pharmacy done via Air Mail and Express Mail and the payments accepted were via credit cards alone; Xlpharmacy.com accepted VISA and American Express payments only.

No returns were allowed by Xlpharmacy.com, although the shop provided refunds for orders which were not fulfilled or “short-shipped”. Xlpharmacy.com, though, only shipped Sildenafil and Tadalafil products (and not others) in Canada, Norway, Sweden, and Germany, for some unknown reason.

Since Xlpharmacy.com operated for more than a decade, the shop had a considerable number of reviews available on the web. Good and bad reviews were available for Xlpharmacy.com and the comments below were only some of the examples of buyer comments for the shop:

A buyer, Timas, who posted on September 2011, mentioned that he ordered from Xlpharmacy.com and within 4 days, he got a call from his credit card company that his card was used for a transaction of $1000+. Timas said that Xlpharmacy.com stole his credit card details and used his card for nefarious purposes. Also, according to him, the “good reviews” for the shop were fake as his experience with the store attests to the shop’s evident scam activities.

It was disheartening seeing a bad review for Xlpharmacy.com, but the shop did not have purely bad reviews. On Resellerratings.com, one of the comments for XL Pharmacy from TommyBigBoy, who mentioned that he was able to receive the package he ordered from Xlpharmacy.com within 10 days and stated that he will use the store again.

Xlpharmacy.com did have its share of good and bad reviews; although the store had good reviews, the bad reviews for the shop were not supposed to be shrugged off, as there may be some truth to the buyer complaints available for Xlpharmacy.com.

Xlpharmacy.com disappeared in late 2015, so I gather that this shop did not have reviews for 2016 and onwards. Nevertheless, the store did have results from various reliable sources such as Legit Script and Scam Adviser.

Legit Script alerted the public in 2011 about illegal pharmacies. Unfortunately, according to Legit Script, the store XL Pharmacy on top of their list of illegal online pharmacies which puts the buyers at risk for dangerous medicines and illegal activity.

Xlpharmacy.com is not merely a pop-up store like the others; Xlpharmacy.com did have a long run—the store had more than a decade of service for its buyers. However, the shop had a tainted integrity due to the complaints from buyers available for the company. Although Xlpharmacy.com had excellent buyer reviews (5/5 stars), the complaints about the shop’s apparent credit card fraud activity concerned a number of clients. Good thing the store isn’t online anymore; we’re rating Xlpharmacy.com 1 out of 5 due to its closed standing.