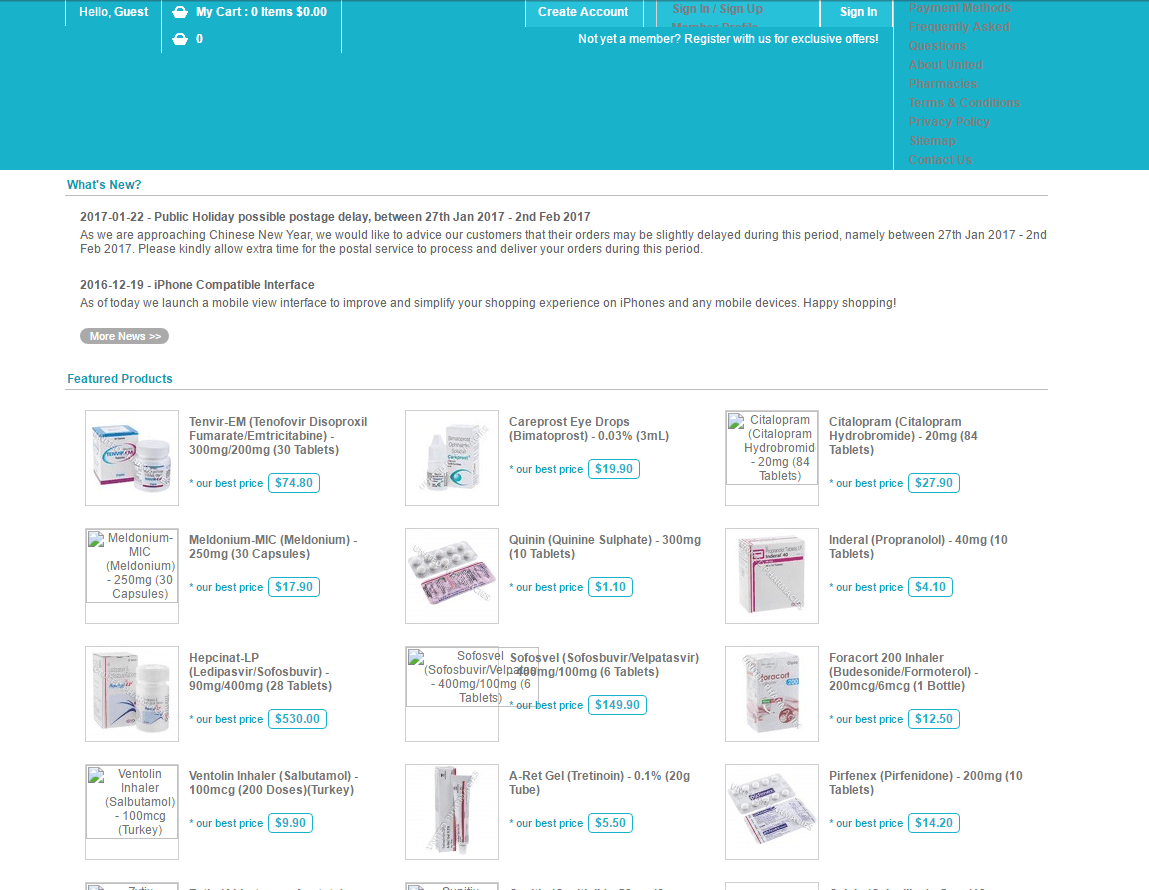 Unitedpharmacies.com used to be an online drugstore that was delivering branded meds worldwide. On their “About Us” page, the store explains it had over five years of experience in selling online medications. United Pharmacies e-store was previously located in Oceania and, apparently, the meds were shipped from different locations such as Australia and the UK. The store mentioned it served more than 100,000 customers since it opened.

Curiously, the meds could be purchased without prescription since the store is obligated to comply with different legislations in Oceania, where prescriptions are not mandatory. Its repertoire of medications could be used to treat pets, allergies, pain and many others. I did not find any branded erectile dysfunction meds. The orders were shipped via regular airmail and EMS couriers. Customers were asked to pay an extra fee for shipping of 8.50$ and 32.00$ respectively.

Customers were able to pay via wire transfer or international cashier’s check only. I thought this was a very old-fashioned way to make business. Since the drugs were branded and not generics, the pricing could reach over $300 for a box of medicines.

United Pharmacies s-store did not mention anything regarding the FDA status of its products, neither its refund policy. Consumers could contact the store via phone only.

One of the funny things I read on the website was that United Pharmacies s-store was unable to ship overseas, while at the same stated many international customers were served. I couldn’t question the customer service giving the fact the pharmacy is not working anymore. Nothing about reshipping lost orders or refunds were stated on the website.

Surprisingly, I got lucky and found some online reviews about this pharmacy. I wasn’t exactly swimming on reviews, but some are better than nothing, especially for a closed website. Back in 2012, a user “just didn’t like” the apparent lack of discretion in the packaging. He was satisfied how fast the order arrived in “about 5 days” after the purchase.

Another user from the same website said, “everything was fine” when he purchased something from United Pharmacies e-store. He cautiously indicates that a prepaid card needs to be used for the payment, as nationwide didn’t allow buying from the store.

Moving forward 4 years, in 2016, another customer didn’t have a nice experience with the pharmacy. According to this woman, her bank account was emptied “two days making an order” suspecting it was from United Pharmacies e-store’s side. These reviews vary quite a lot and having their bank account stolen is a very serious allegation. I need to investigate further to realize if it was an unlucky coincidence or not. Many illegal stores use their consumers’ data to steal a person’s identity and/or money.

Scam Adviser clearly warns me to the fact that United Pharmacies e-store was threat listed once. This means that the legitimacy of the store was already on the line once and that the website may not be very secure.

The store is located in Oceania according to the information displayed on the website. However, Scam Adviser says United Pharmacies shop was located in Netherlands with the possibility of also being situated in Hong Kong. The store was probably playing around with its domains to be harder to track down.

Nevertheless, Scam Adviser gave Unitedpharmacies a 66% score. Apparently, the store was very popular, which is always a good thing. I can’t say I was delighted with all the reviews but only was necessarily bad. I wish I could know if that user had a point in alleging such a thing.

It isn’t typical for closed online pharmacies to have such a good score on analyzing tools like Scam Adviser. I was even more intrigued.

Unitedpharmacies.com offered quite some good discounts to its customers. Doing a wire transfer, especially an international one, can cost a considerable amount of money. Since one of the payment is a wire transfer, it was very thoughtful of United Pharmacies e-store to offer 10% for payments done this way.

The store also offered special discounts, holidays specials and 5% off for members of United Pharmacies e-store. The client would only need to register himself and they could enjoy these offerings.

The price of branded medications is always higher than generics. Having ways to save the consumer a bit of money while purchasing them is a good marketing trick. Members of this store would also get vouchers from time to time.

Unitedpharmacies.com is one online store that I cannot formulate a proper opinion about it. This store, now closed, had various advantages and some other downs.

Most of the older reviews found online were very positive regarding the store. However, in 2016 one client wasn’t very happy because her bank account got emptied two days after purchasing in United Pharmacies e-store. I was expecting Scam Adviser to support this latest review. However, Scam Adviser considered the site to be safe, although it was threat-listed previously.

Ultimately, it doesn’t matter that much since the store is closed. I believe United Pharmacies e-store was the type of store that a person should proceed with caution. In summary, unitedpharmcies.com is evaluated a 3 out of 5.