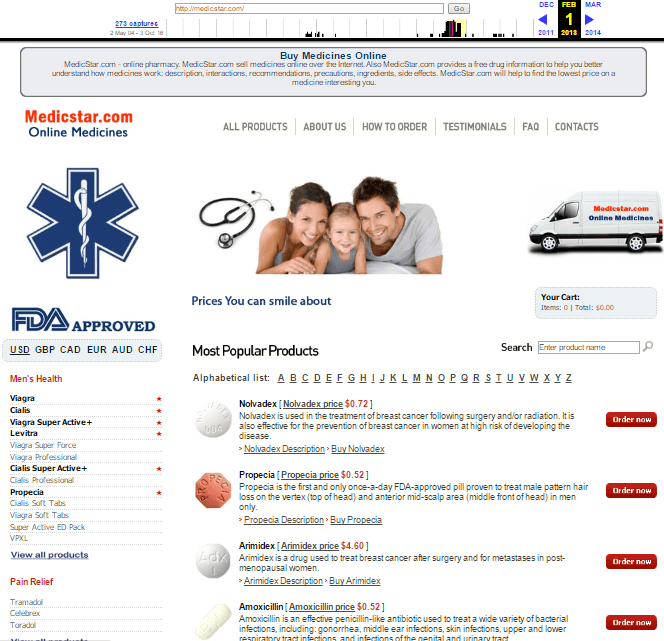 Medicstar.com classified its service as an online pharmacy with an aim to forward generic and branded FDA-approved medicines to its clients. The products on Medic Star e-shop exhibited platitude as it contained the routine products seen on typical online stores. As expected, Medic Star had generic products for erectile dysfunction (counterparts of the branded Viagra and Cialis), of pain relief products, antibiotics, women’s health medicines, antidepressants, and a variety of other drug additions. The data saved for Medic Star did not state when the store began its operations, but it was clear that Medic Star closed down sometime in 2013. There was no hint that the store operated beyond the year 2013, as the blogger reviews beyond the mentioned period indicated that the shop’s already closed during 2014.

According to the recovered information for Medic Star, the medications available then on the shop were from licensed facilities situated in the United States and in India. Though no specific advisory was stated concerning the approval of the meds by the US FDA, the store stated that the companies manufacturing the drugs it vended underwent approvals from the US FDA for their manufacturing processes.

Medic Star accepted payments from Visa credit cards and E-checks only and shipped the orders using the slow airmail option (for buyers who wanted a cheaper shipping option) and also the courier delivery for buyers in the United States. Medic Star did not offer any phone number on its store; the shop only had links for the buyers to contact them. The store is closed now, so there’s no way in contacting the shop today. If you’d visit the store’s domain, you’ll only see that the domain Medicstar.com is now up for sale.

Since the store ran for a good 2years, I thought that maybe the shop did have buyer reviews from either happy or unhappy, ranting customers. However, the store Medic Star seemed to be an unpopular choice for an online internet medicine service, since buyers were unable to render the shop reviews. Of course, pharmacy review sites had their opinions on Medic Star level of services, but since they were only thoughts on the credibility of the shop, we can’t treat these blogger opinions as facts.

The shop may have had several good reasons for its lack of reviews from external sources. Having no reviews does not necessarily mean that the store was a scam site; there are good shops which do not have platform reviews too. But, buyers tend to associate integrity and credibility to buyer comments and feedbacks, so a review-less online shop may put off clients, especially the new ones. However, though Medic Star did not have third-party platform reviews, the shop had a few buyer comments posted on its testimonial page:

These reviews from Adam Sandler from TX and Mark Williams from NY were just excerpts from the long list of “buyer testimonials” published on the site.

According to Adam, his Viagra order works. He did not elaborate on the details of his order, but he seemed content with the service given to him by Medic Star.

Mark, on the other hand, discussed how he found the store convenient to order from due to his busy schedule. Mark was highly grateful for the service from the e-store. He did not also disclose extensive details on his order, although we can imply that he was able to receive what he ordered from Medic Star based on the theme of his comment.

Medicstar.com put an end to its service during 2014 so basically, there were no existing reviews for this online store for the year 2016. However, there were several existing online domain review sites such as Scam Adviser which still has data for the closed store.

According to the analysis report of Scamadviser.com, the store Medic Star is owned by a man named John Distler. This does not mean that John owned the pharmacy; John may have owned the domain rented/bought by the closed Medic Star. Now Scamadviser.com did not reflect that the website is down, but its analysis indicated that the Medic Star domain is now for sale.

Old records of Medic Star were unable to mirror discount offers or the coupon offers from Medicstar.com to its clients. We were able to observe that the e-drugstore offered its buyers free pills for their every purchase (for the erectile dysfunction meds, at least); besides the freebies, however, there were no other options for discounts to mitigate the drug costs from Medic Star.

Medic Star did not have actual buyer comments and reviews which can attest to its decent or inferior service. Although the shop existed for a few years, its exposure on the web seems insufficient for the shop to gain buyer comments from third-party platforms. Since today, the domain Medicstar.com is already for sale, we’re giving the e-shop a low rating of 1 out of 5.